Roll over image to zoom in

Arrived quick, easy to put together and great price. I love it!

Ordered and received desk, in total a bit over 1 week. While one of the pictures shows rounded corners, they are actually sharp as seen in the other pictures. The flattened part on one end of one of the four cross rods was a bit misaligned, causing it to stick out a bit. The shelf space does not match image dimensions, with clearances: infinite, 11", 7", 17", and 1.5" to the floor. While supposedly reversible, the frame lacks two of the four holes with which to put the cross metal rods on the other side, thus the shelves must stay to the left or go without. Can't say much about durability as it has only been a few days, but it seems to be holding up well. I say minus 1 star for the non-reversibility and misaligned rod, as those are the things I actually care about. As long as it holds up for at least a year, my verdict is that this is a good deal for a cheap desk.

It took about two weeks to get delivered, but it was well worth the wait. This desk is super cute and very easy to put together! It's definitely worth the price.

I just finished putting together my desk and I love it! It was so easy to put together and was well worth what I paid for it. The quality is very nice. The color of the wood is stunning! My husband loves it! Will definitely consider Vecelo for future orders and recommend to friends and family.

I ordered 2, only 1 was shipped.Customer service was top notch

Want to return? Here's what to do.

We want you to LOVE every vecelo purchase. So if you only like it, you can return it within 100 days for a full refund. No sweat. If you purchased one of our products right here on Vecelo.com, you have more than three months! We know that these things can take time, so we give you 100 days upon delivery to thoroughly test your new Vecelo product in the comfort of your own home.

The item must be returned in good condition—no drool, stains or mysterious smells—with the necessary paperwork, parts, and accessories to ensure full credit. Oh, and proof of purchase will be required.

When that’s all in order, please submit this form for return authorization. We’ll send you a prepaid return label and instructions for arranging a FedEx pick up.

After we receive the returned item, a refund will be generated back to the original form of payment within 2-3 business days.

If you purchased a Vecelo product at any of our partner sites, then your return window and conditions are defined by that specific retailer.

Let customers speak for us

It took months to receive these and on top of that I was missing a small but crucial piece that is needed to hold the drawer to the frame. A little disappointed but all things considered they are beautiful pieces of furniture. Hopefully I am sent the missing pieces!

I received the package very quickly. It was quite heavy and I put it together myself. It took maybe 4-6 hours. I found that some of the supports in the middle are a bit crooked and don't touch the floor. These middle supports also make it difficult to store things under the bed, but my storage bins fit under the bed without additional bed risers. It's been a little over a month and so far so great with the bed frame. 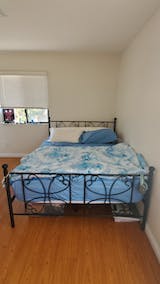 Shipping was in a week of order. The price was extremely reasonable compared to others who sell this same item. With a bit of patience and ability to assemble it like playing tetris with how some of the parts fit together, the assembly wasn't too terribly bad. I would recommend before you put the hinges and magnets on, to screw in the mini screws first to open up the screw holes. It made it so much easier when attaching the hinges and magnets. The final product itself is really eye pleasing and a perfect fit as a nightstand. 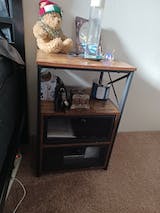